“Real Images and Facts about Our Solar System” 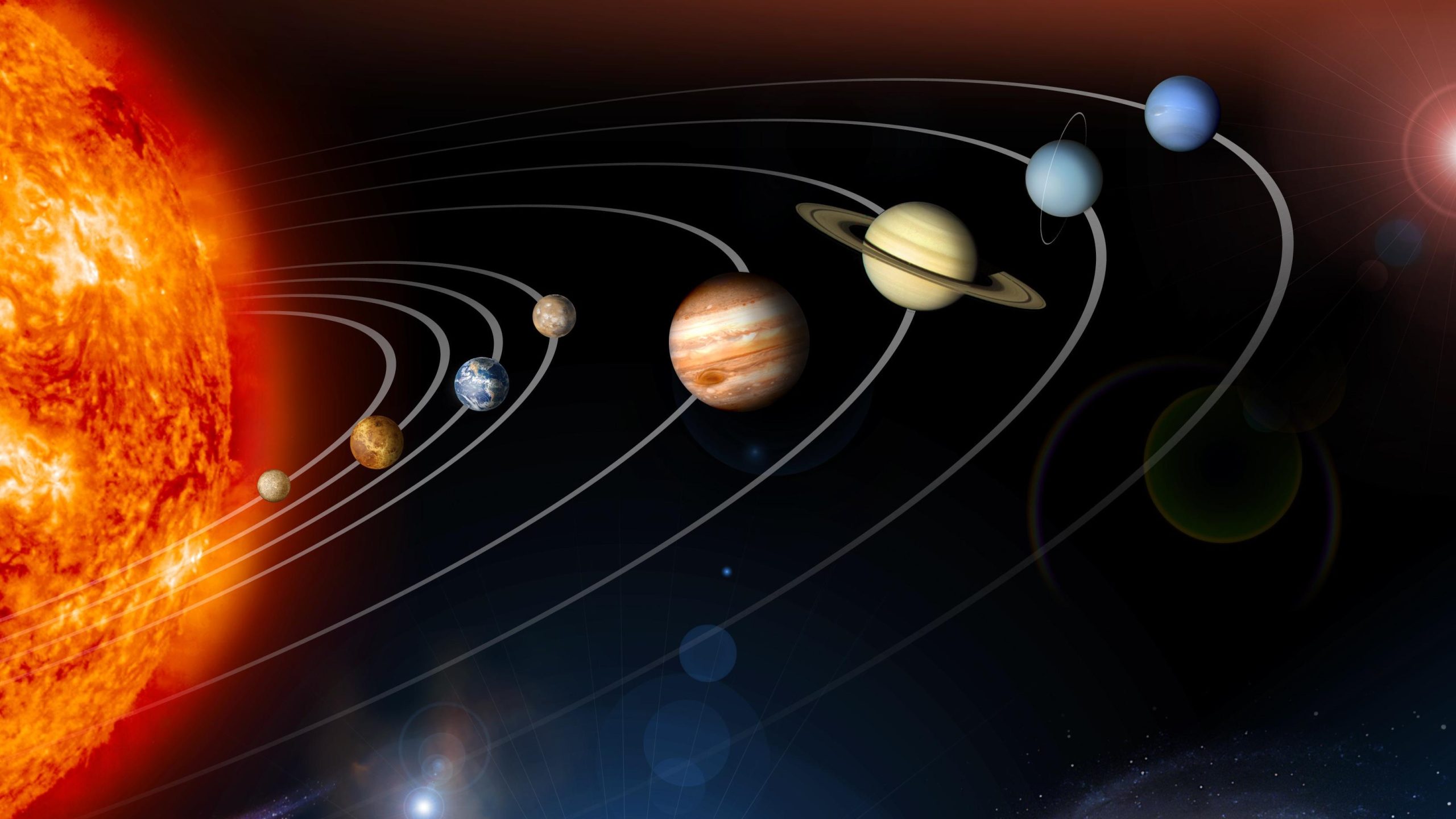 “Real Images and Facts about Our Solar System”

Before modern telescopes humans could only imagine what the surface of the sun and the planets look like; now advanced technology has made it possible to get in close and take images of the sun and the planets deep in our solar system. Now get ready to see the solar system as you’ve never seen it before and see images that were so good they shocked astronomers burning with the energy of a trillion nuclear bombs per second.

The Sun is the largest body in our solar system accounting for 99.86 percent of the total mass. One of the most dramatic images of the sun was captured by the solar dynamics observatory on August 31, 2012 when a long filament of solar material that had been hovering in the sun’s atmosphere erupted into outer space this beautiful but deadly coronal mass ejection came traveled at over 900 miles per second.

The planet closest to the Sun orbiting at an average distance of 36 million miles, Mercury has been studied by many spacecraft throughout the years. But NASA’s messenger spacecraft was the first to orbit the planet images showed the surface covered in Craters in all sizes and massive asteroid impact sites like The Van Ick Crater which is 168 miles in diameter and the Caloris Basin which is 960 miles in diameter with mountains at the outer rim 1.2 miles high. These are images with spectral surface measurements that were taken on April 29, 2015. Messenger snapped more than 200 000 images of Mercury before ending its mission in 2015 with an intentional crash into the planet’s surface. The probe’s demise was inevitable as messenger had been orbiting mercury since March 2011 and had run out of fuel right before impact it sent back its final image the highest resolution photo of Mercury ever captured.

You’d think that mercury would be the hottest planet because it’s the closest to the sun but our next planet is actually the hottest in the solar system. The second planet from the Sun and also earth’s closest neighboring planet; Venus has a thick atmosphere made up mostly of carbon dioxide, sulfur dioxide and nitrogen gas which traps the heat of the sun making it a hellish world. Venera 13 was a probe built in the Soviet Union. For the Venera program to explore Venus it was the first lander to transmit color images from the surface of venus. Venus is a hot world with surface temperatures as high as 880 degrees fahrenheit. The probe was designed to only last 30 minutes but it must have been built like a tank because it continued to transmit data and images for more than two hours after landing on March 1, 1982. NASA then sent the Magalan spacecraft to venus in 1990 to image and map the entire surface it sent back images of the planet’s surface showing evidence of volcanism tectonic plate movement. Turbulent surface winds and miles of lava channels including one measuring 5,550 miles long another incredible image of the volcano Mat Mons that rises three miles. Once Magellan was finished mapping the entire surface it also ended its mission and crashed into the fiery planet.

The third rock from the Sun, the Earth is very unique and the only place known to have life in the solar system there have been lots of amazing images taken of the planet we live on but modern satellite photos are probably the most breathtaking like this image from nasa of the earth as it looks right now. This amazing true color image was taken by NASA’s moderate resolution imaging Spectroradiometer from 22,000 miles above the earth and shows North and South America as they appear from orbit the moon also making a guest appearance in the background. On December 14, 2020 NASA captured a total solar eclipse with the goes that’s quite amazing but here is something you may not have seen in March, 2011 a russian satellite named Electro-l captured incredibly detailed images of the earth that appear to rival NASA images. Many claimed that they are more accurate and show different things but NASA say, “They’re not accurate, we’re not sure” but which images do you think are the best. By the way remember the messenger spacecraft it snapped a photo of the Earth and of the Moon and sent as a postcard before speeding towards Mercury.

Mars has always been of great interest to humans the fourth planet from the sun the red martian planet has been studied heavily The Viking Orbiter-1 took stunning snapshots of Mars in 1979 like this photo of the Valles Marineris. The Viking-2 orbiter snapped an image showing the southern polar plains and polar ice cap in 2013. European Space Agency’s Mars express took highly detailed images of Hebes Khasma; the northernmost part of valles marineris as seen in this movie created from the images but since then four rovers have already been on the planet’s surface studying and snapping photos. The images from the Mars curiosity rover including a selfie were the most incredible images from the surface of an alien world.

The largest planet in our solar system the gas giant; Jupiter has the most unique look of all the planets with its giant great red spot a storm on the planet that’s been raging for 350 years and is so large it could swallow the earth whole. On July 10, 2017 the Juno spacecraft flew just 5,600 miles above the great red spot and nabbed the closest image of the massive storm ever taken. This image a bit farther away is a little bit truer in color to what we would see if we were orbiting Jupiter but juno also captured unbelievable images of polar regions which cannot be seen from Earth and whatsurprised astronomers was that Jupiter’s north pole has eight storms swirling at its center and they’re laid out in a precise geometric pattern the storms appearing as stable fixtures. In Jupiter’s atmosphere and not normal weather but more incredible photos would come and on November 13, 2018 a new image from Juno was created using data from the juno cam imager that’s nothing short of breathtaking. On June 27, 2019 the Hubble telescope captured the planet’s trademark great red spot which researchers say is shrinking we got an awesome video coming up on Jupiter.

So make sure not to miss it as the number one contender for the most beautiful celestial body in the solarsystem; Saturn is hard to beat with its iconic rings and probably the best images of Saturn to date come from the Cassini Higgins spacecraft on October 21, 2002.The spacecraft was 177 million miles away from Saturn when it snapped his photo and on March 27, 2004 as it got closer took this natural color image as it neared its arrival into saturn’s orbit. Now here’s a mind-blowing image of saturn you may never have seen before this is saturn backlit by the sun and with that added light. Cassini was able to image the ring system in a way not possible from Earth and the result is stunning but in 2004 the Hubble telescope was also in on the action and snapped an amazing photo of an Aura. In 2016 the Cassini spacecraft sent back images of Saturn’s northern hemisphere what scientists were surprised to see was a hexagonal vortex storms they’ve been studied but no one’s sure how this forms. On September 15, 2017 the spacecraft made its final approach towards the gas giant and before sending this final image burned up in Saturn’s atmosphere like a meteor known as the sideways planet because it rotates on its side.

The seventh planet from the sun, one of the best images taken Voyager-2 made a flyby of the planet in 1999 and this image was taken using three color filters. On July 11 and 12, 2004 a composite image of Uranus obtained by the Keck telescope was published showing the icy cold world and its rings those bright spots that you see on the surface of the planet are auras. In November of 2011, the Hubble telescope snapped an awesome image of Uranus and a colorized photo shows an icy blue sphere with red rings and in 2017 the Hubble telescope captured auras again on Uranus.

Neptune is the eighth planet in our solar system and the farthest away from the sun. The only spacecraft that’s being close to neptune is Voyager-2. One image taken by the spacecraft shows a giant storm ranging on the surface of the planet Neptune’s great dark spot. Before voyager-2 would complete its mission and head towards interstellar space it made a close approach and snapped this image showing bright cloud streaks in Neptune’s atmosphere. The Hubble telescope has taken a recent image of Neptune and in december 2020 snapped this image with the great dark spot because it’s so far away from us the best images we have of Neptune from Earth so far was taken by the European Southern Observatory’s very large telescope using a special narrow field adaptive optics mode of the multi-unit spectroscopic explorer instrument.

We’re still too far away to get close images of Proxima Central. The next planetary system to ours and current spacecraft headed in that direction will take thousands of years to get there but there are plans to create a wafer thin nano probe called breakthrough star shot that has thin sails to capture energy from a powerful earth-based laser this would accelerate the probe at 134 million miles per hour meaning the tiny probes could reach Proxima Centauri in 20-25 years. Just think of the images it could take if that happens sometime soon you’ll see it here our friends over at channel perception just released a cool new video about nasa’s plan to stop an asteroid we thought it was really awesome so you should go check it out we think you’ll enjoy it.

2 thoughts on ““Real Images and Facts about Our Solar System””